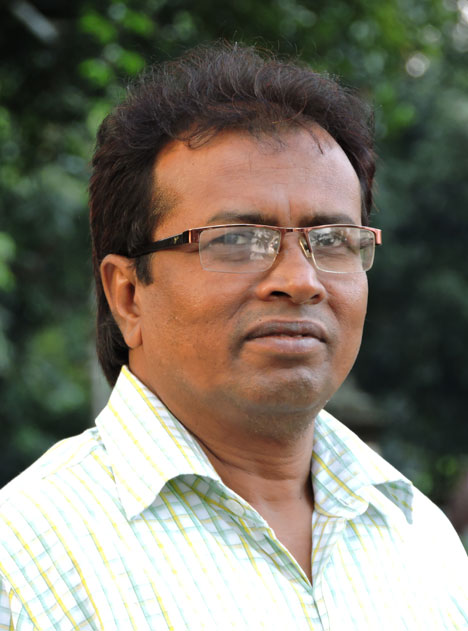 Artist Dr Hira Sobahan (Md. Abdus Sobahan) was born on 24 May 1970 in a village namely Nandibari, Mymensingh, Bangladesh. He is a prominent printmaker, painter, designer, researcher, organizer, editor and writer. He attained his MFA (Master’s of fine art) in Printmaking in 1995 from the Faculty of Fine Arts, Dhaka University. He did his PhD in 2011 from Rajshahi University. He is particularly conversant with modern approaches of art, namely concrete, semi-abstract, and abstract. In his artworks, he depicts the natural beauties of this country, contemporary lifestyles, disasters, various shortcomings of society, social decadence, decaying wall-painting, human beings caught up in the clutches of time, and their delight and despair, through various techniques and medium such as woodcut print, etching, aquatint, soft-ground, drypoint, stone-lithography, monotype, mezzotint, collography, oil, acralic, oil pastel, water color and mixedmedia. He has given his artworks the title ‘Life and the Narrative of Time-1’ in 2019 at La galerie, Alliance Francaise de dhaka, Bangladesh. In 2003, he arranged his first solo printmaking exhibition titled ‘Image of Life and Time’ & his second solo painting exhibition titled ‘Chritite Vasshor Zia’ in the national art gallery of Bangladesh Shilpakala Academy. He has participated in almost 80 international, national and other art exhibitions (1990-2019). He has achieved Ser-a-Bangla Goldmedal with 9 honours & 16 awards  including ‘Bangabandhu Gold Medal’ in the field of fine arts and printmaking after taking part in national, other art exhibitions and condibition of fine arts and printmaking anothers recognize oraganiztion . His artworks have been preserved in intuitions and personal collections, both at home and abroad, including ‘Bangladesh National Museum’ . His six research articles related to fine artshave been published in recognized journals.Two academic books on ‘Fine Art Printmaking’ ,‘Technique of Printmaking’ and the  ‘Technique of Fine Art’ have been published by ‘Prothom Prokashon’, Dhaka in February 2017. He has established ‘F. Rahman & K. Nesa Foundation’ and ‘F. Rahman & K. Nesa printmaking studio’, Vice-President of  ‘Manob seba songgha’ and Vice-President, ‘Canvas of Bangladesh’ , Dhaka Moreover, he is an editor & publisher of half-yearly Journal the title of ‘Shilpakotha’ & ‘Prokriti -Prottoy Prokashon’ . Currently he is Professor at the Department of Painting, Oriental Art and Printmaking, University of Rajshahi, Bangladesh. 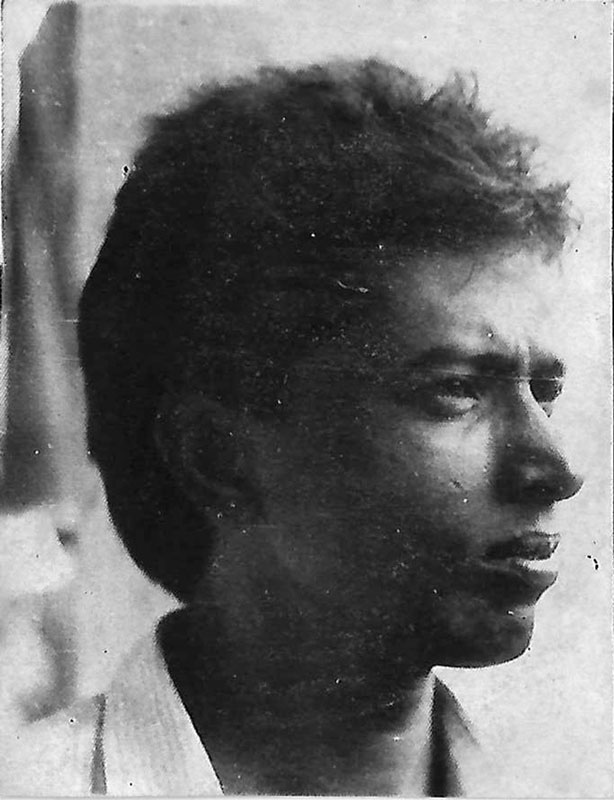 In the greater Mymensingh district of Bangladesh (now Mymensingh division) once was an ancient town called ‘Muktagacha’ . It was known as ‘Alapsingh’ Pargana during the Mughal rule. Besieds, the original name of Muktagacha was ‘Binodbari’ . At that time, after the death of their father four brothers, Ramram Acharya Chowdhury, Harram Acharya Chowdhury, Bishnuram Acharya Chowdhury and Shibram Acharya Chowdhury respectively, travelled from Jhakar area of ​​Bogra district through Shibganj and Muktagacha Banarpar of Fulbaria area, crossed Ayman river (at present Chowrangi intersection) on a ‘bajra’ (a kind of boat), and took a break at Rajghat. Surrounded by natural beauty, the environment of Binodbari was like a framed picture.Attracted by this beauty, the four brothers decided to build a palace there and run the government.

During the rule of zamindars, it was customary to receive the visiting zamindars with gifts. At that time, on the eve of the arrival of Raja Bahadur, various members of the society used to give gifts to please the kings. At that time a man named Muktaram Karmakar gave a tree (pinasuj) as a gift to the king on his arrival. The king was fascinated by the skillful craftsmanship of the tree and changed the name of ‘Binodbari’ to ‘Muktagacha’ , combining Muktaramr’ s ‘mukta’ and the tree given to him as ‘gacha’.

In a village called ‘Nandibari’ in the municipal area of this Upazilla of Muktagacha, the artist Dr. Hira Sobahan was born on 24 May 1970 to an aristocratic Muslim family. His full name is Md. Abdus Sobahan Hira. However, he is widely known as ‘Hira’ . His father Alhaj Faizur Rahman (1914 – 8 August 2014) was a prominent rice-mill, Transport and cloth trader in Muktagacha town. He was pious and was the president of Muktagacha Small Mosque Committee for many years, president of Muktagacha Cloth Merchants Association, vice-president of Muktagacha Big Mosque Committee and a social worker. Hira Sobahan’s mother Karimon Nesa (1925-27 September 1998) was a housewife and a generous woman.When the artist Hira published the magazine ‘Nabadiganta’ in handwriting in the 1990s, his mother inspired himby giving him colours for cover drawing, pen for writing and 200 taka for photocopying. Grandfather Gul Mahmud (? -1981) was a pious man and a famous Moazzem of Muktagacha small mosque. Every month during Ramadan, he used to wake up the people-to-be-fasting for ‘sahri’ in the morning with a lantern in his hand. Grandmother Kitabjan Bewa (? -1983) was a housewife. Artist Hira Sobahan is the third of four brothers and one sister.

His other siblings are Alhaj Abdul Karim (1955), Alhaj Abdur Rashid (12 December 1964), the only sister Khaleda Begum (June 5, 1974) and the youngest brother Abdul Aziz Mukta (10 May 1977). Three brothers are prominent businessmen of Muktagacha and the sister is a housewife. They are jointed others Soceial Activities. Hira’s Elder brother Alhaj Abdul Karim also pious and was the Ex. president of Muktagacha Small Mosque Committee. In this family circumstances, Dr. Hira Sobahan grew up. He observed the movement of the surrounding nature, people and society. From his childhood, the manifestation of art consciousness started presenting itself. He was an eyewitness of the catastrophe during the liberation war.As far as he can remember, he was approximately 5/6 years old (his father could not mention the exact time of admission to primary school as he did not remember the actual age). At that time, the family was hiding in a hole in the ground with their relatives. He used to hide in the houses of his relatives in the village to escape the oppression of the Pak aggressors. He used to play various sports and whenever he had time, he used to draw on the floor and walls of the house with coal or chalk.

Sometimes he made things out of clay, sometimes he made paper houses and boats. In this way, artistic ideals began to flourish in him. From class two to five he used to draw things on slate, notebook or even on books by looking at the picture on the pages of the books around him.He used to place a thin piece of paper on the picture printed on the book and do tracing with a pen.

Sometimes he used to make designs with needles in a cloth handkerchief.Originally, the tendency to practice calligraphy was noticed in him from class six. He used to feel more comfortable arranging letters in different designs with pen-ink in the school notebook. At this time, his inclination towards painting increased due to his association with Muktagacha Kisholay Kachi kanchar Mela. He regularly participated in various painting competitions and won many prizes. During this time, he used to observe the pictures and landscapes of various movie heroes and heroines drawn behind trucks and rickshaws on the way. And while coming home, he used to buy powder colour from the market mixed with water on a piece of paper and cut his hair, tie it with a jute stick, make a brush and draw pictures.Petting birds was one of his hobbies.He kept pigeons, tikka mynah and pigeons in his own hand-made bird cages. 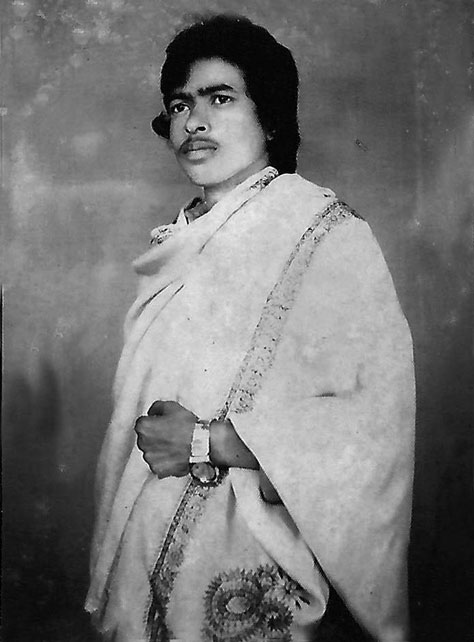 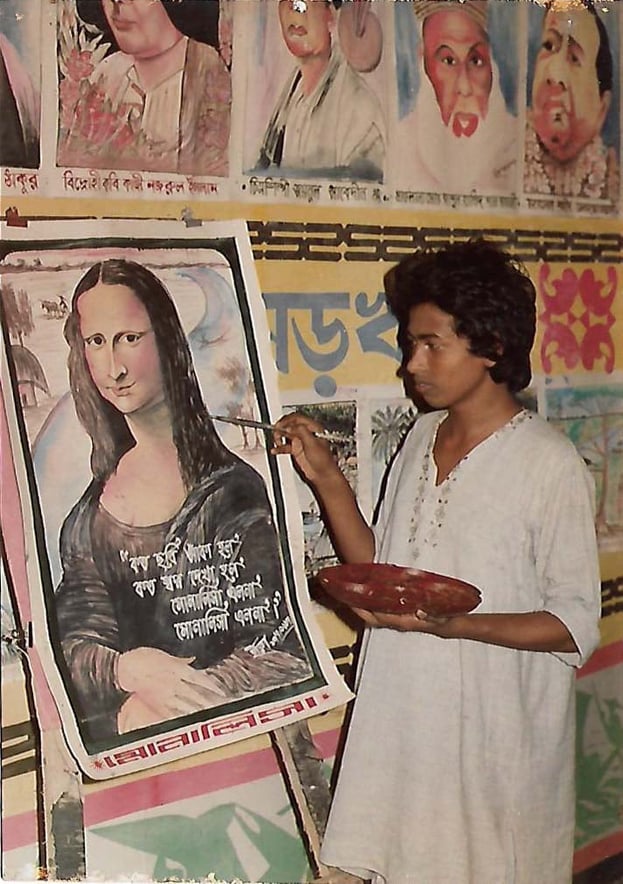 At different times, he used to look for bird nests in different trees and collect the chicks. Probably while studying in class IX, at a friend’s request, he filmed two roosters on the back of the truck. He got one hundred rupees for drawing these. This was basically the first earning of his life. He also wrote various types of signboards once. His calligraphy skills have been excellent ever since. Sometimes, he used to draw pictures in the practical notebook for the students of X class. He has also made banners, gates and decorations for Eid, Puja and various cultural events in the area absolutely asa hobby. And in this way the artistic genius began to flourish in him. Although he grew up in a religious school, his family inspired him to draw.Bottom left picture :My father Alhaz Faizur Rahman and my mother korimon nesa.bottom right Me my daughter Prokriti my son Prottoy and my wife Sarkar Rumana Akter . 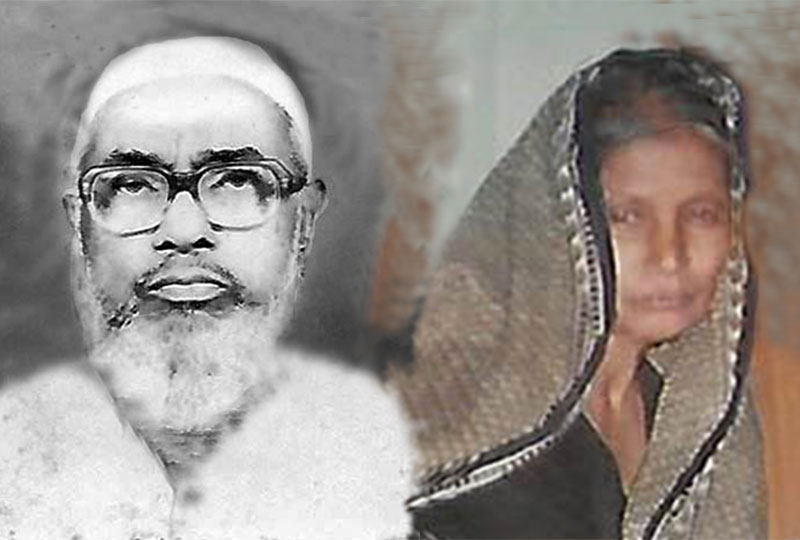 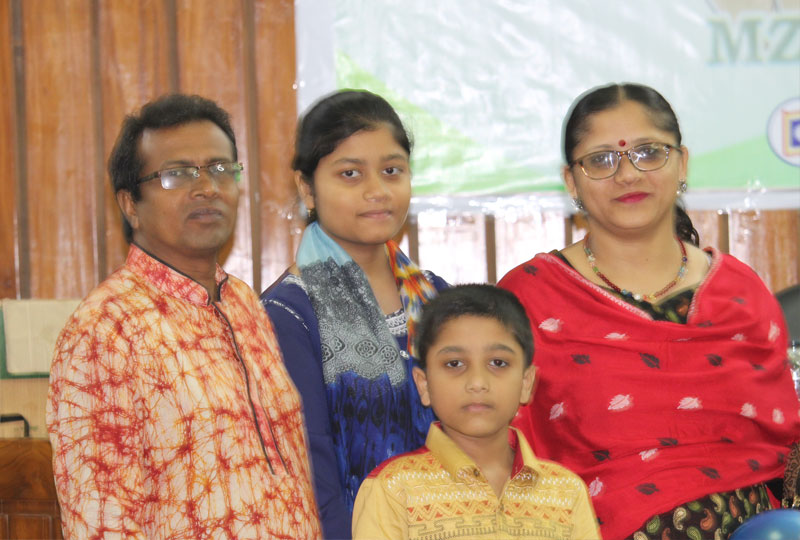 46. Art Exhibition in commemoration of the 24th Death Anniversary the Father of the Nation, 1997, Organized by the National Mourning Observance Council, Institute of Fine Arts, Presently Faculty of Fine Arts, University of Dhaka, Bangladesh.

49. The Theme Environmental Degradation participated by the up – coming artists of the Country, 1997, Hyacinth Garden Gallery, Dhaka, Bangladesh.

Dr. Dipu Moni, 2019, Minister of Education, Govt. of the People’s Republic of Bangladesh.

Central Academy of Art, 1997, Malaysia. many other private and institutional collections at home and abroad.

Thursday, April 2, 2020, the Daily Star Magazine ‘Life and the Narrative of Time-1’at AFD

I’ m basically a printmaker. I obtained the highest degree in Printmaking in 1995 (examination was held in 2000) from the Faculty of Fine Arts, Dhaka University. I also work on oil painting, mixed media, acrylic, watre colour, cover drawing and design. And I’ m involved in research work-editing the Sanmashik (half-yearly) magazine “Shilpakatha” and writing books. “Printmaking of Bangladesh and three Artists : Safiuddin Ahmed, Mohammad Kibria and Monirul Islam (1948-2008)” is the title of the PhD thesis I did from Rajshahi University in 2011. I established “F. Rahman and K. Nesa Printmaking Studio”and “F. Rahman and K. Nesa Foundation” in 2020. I am a member of Asiatic Society of Bangladesh, life Member of Muktagachha Municipal Library, Mymensingh. I basically feel more comfortable with crafting in tangible, semi-abstract and abstract modern art forms. In the media of woodcut, etching, aquatint, soft-ground, drypoint, stone-lithography, monotype, mezzotint, collography, I like to paint the nature of the rural life, disasters, various inconsistencies in society, degradation of morals, decaying murals, people caught in the prison of time. I have been composing a collection of art pieces on the subject of happiness and sorrow in abstract and semi-abstract images. That is why I have titled my artwork “Narrative of Life and Time” and “Narrative of Time”. Since the last half of the nineties, I have been engaged in various experiments on the subject and technique of printing. Gradually, different types of features in print-painting began to be implemented in my artwork. In particular, I feel more comfortable printing images in a combination of etching, aquatint and soft- ground. I always look forward to exploring the human life flowing in the ferry of time, the ruins of nature, the course of evolving time. The fact that artist Mahmudul Haque’s expertise made the first successful experimental printing work through mezzotint in this country is undeniable. However, as far as is known, I was the first in this country to try to excel in technical skills by printing realistic images through this medium under the supervision of Japanese Professor Toshioki Shirooki. My “self-image” image is a perfect example of this process. In particular, with the application of mezzotint tools rocker, I have created a grain by grating the real texture with a scraper, which, after being imprinted on the paper, forms a special feature of this media which shows lightfrom darknessin multi layered colours. I usually divide the large zinc plattes made in this country into a few parts and arrange them in a special way to exhibit my artistic skill in an abstract or semi-abstract manner. The existing happiness-sorrow, instability, anarchy, violence-hatred, the dynamics of the primitive social picture in different contexts become thecore of my picture. Using strong rhythmic lines, delicate textures, deep tonalities, triangles, circles, semicircles, simple curved geometric forms, multiple shapes, I always look for aesthetic language in my paintings. I am accustomed to presenting images in horizontal, vertical or square shapes. I am also engaged in the practice of art of various means like mixedmedia, acrylic, pastel, water colour, oil colour etc.Through these arts, I hope that I can walk in the arena of national and international art by exploring the traditions of this country and my own art form. I also hope to keep myself involved in the welfare of helpless children. In the end, I think my painting will be successful only if my paintings can create the slightest interest in the art-loving people.